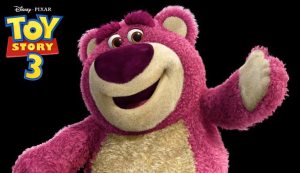 That’s Lots-O-Huggin Bear from Toy Story 3 and he may look like a kindly bear, but don’t be fooled my friends.  He’s shady, sneaky, and just plain ole mean…the antagonist of the movie.  He comes off as nice at first,  but then we find out he’s a sadistic and domineering leader.  And it’s not until we get some of his background story that we come to understand that he wasn’t always that way, but a series of hurts cause him to worry more about protecting himself than reaching out to love and care for others.*

Do you ever look at couples who have been together for a long time and wonder why they’re so unhappy?  Why they just seem to hate life and sometimes each other?  I always wonder if there was a time when they were super happy and something happened to them and it fell by the wayside.  Maybe they’re like Lots-O-Huggin and have switched to self-preservation mode…lashing out first before their partner can hurt them.  Are the happy couples the ones who are able to shake things off and not take things so personally?  Do they make the active choice not to keep track of every time their partner hurts or slights them?  The Bible says that having love for another means not keeping records of wrongs…interesting.

I know that there are a bunch of questions in there, but we’re all interested in chatting about relationships, right?  I don’t want to be in one of “those” marriages and I want to think about it now…before things start going sideways.  So what do you think?

*I promise that I didn’t ruin the movie for you!  You can still go and see this and be moved by its sweet story.