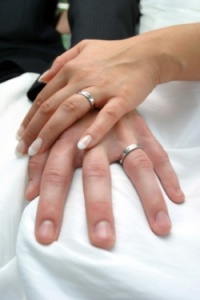 Let’s take it back for a moment ladies…to the time when we were single.  Remember when you’d see a cutie and think, “I wonder if ole boy is married?” while stealing glances at his left hand and praying for nothing shiny to be there.  Now bring it forward and let me ask you a question:

How would you feel if your husband didn’t wear his wedding band?

I’m not talking about in the case where his job just doesn’t allow for it…like he works with his hands and would put himself in danger by wearing a wedding band.  I’m talking about the guy who just doesn’t want to wear it…who says that he’s not used to wearing jewelry or whatever.  What do you think about that?

Whenever I see a guy not wearing his ring, I always wonder what’s up with that?  Did he just forget?  Does he “forget” often?  Is he shady and trying to see if something could go down?  Does he like female attention even though he won’t do anything about it?  What do you think about it?